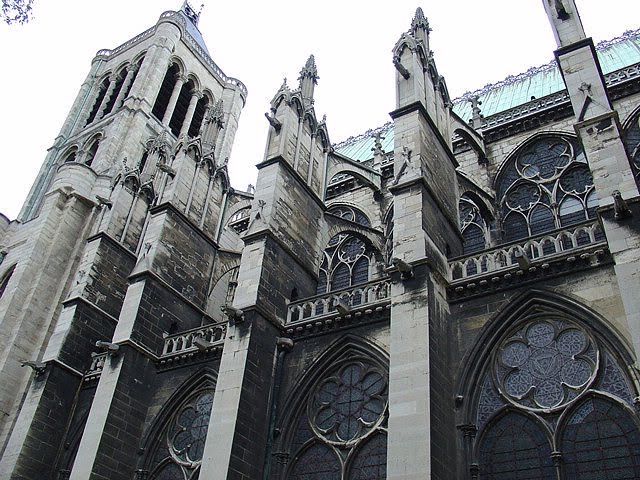 Saint Denis is a journey to the end of the line, so to speak, to the end of Strasbourg / Saint Denis line that terminates in the 18th arrondissement in northern Paris. Once there, you will find one of the most magnificent Gothic cathedrals in all of France – Saint-Denis Basilica! Renowned as the burial place for many a French Monarch who ended up here..."at the end of the line" as well as its groundbreaking Gothic-style architecture; Saint-Denis basilica, France's West Minster Abbey, is one of the most fascinating cathedrals I have ever visited and should be at the top of every Parisian itinerary!

But who was Saint Denis? According to legend, Saint Denis, known as the first Bishop of Paris was beheaded by the Romans in this area of Montmartre during the 3rd century and died a martyr. After his execution, legend states he picked up his head, walked 10 miles and fell upon a plain where later, flowers bloomed and a spring bubbled to life. It is here, his final resting place, that the cathedral stands today.  Look around, you'll find many a sculpture depicting Saint Denis holding his head in this hands.

Heralding in the new “Gothic” architectural style, construction on the cathedral began in 1140 and was completed a little more than 100 years later in 1281. This “French style” of architecture became the new standard in building cathedrals and replaced its predecessor Romanesque style. Once inside, you’ll find those soaring arches and stained-glass window pageantry comprising a most spectacular view of the cavernous nave. It's truly magnificent to behold in person!


However, Saint-Denis is not only about the advent of the new Gothic, it is steeped in the history of the French Monarchy. From Clovis I, who lived from AD 465 – 511, to Catherine de Medici and Henry II, to Louis XVI and Marie-Antoinette of Austria, they're all here and you’ll discover fascinating tombs of surreal and unbelievably life-like sculptures of many of the French Monarchy who lie in the main church as well as the crypts below. One of the most prominent and spectacular tombs in this unrivaled collection belongs to Louix XII and Anne of Brittany – you won’t believe the realism achieved in their effigies, it’s staggering! And, did you know that ALL but three of the Kings of France are buried here plus countless others? It blows the mind to fathom all of the burial sites contained within the walls of the Saint Denis Cathedral. You must see them for yourself.

If you’re planning to visit Paris, be sure to set aside a half day to tour the magnificent Saint-Denis Basilica. From our Hotel Regina near the Louvre, the journey to the end of the line was about 45 minutes on the Metro Line 13. Check out these sites for more information: SacredDestinations.com and National Monuments/Saint-Denis.