The Legend of Laocoön – Vatican Museum in Rome, Italy 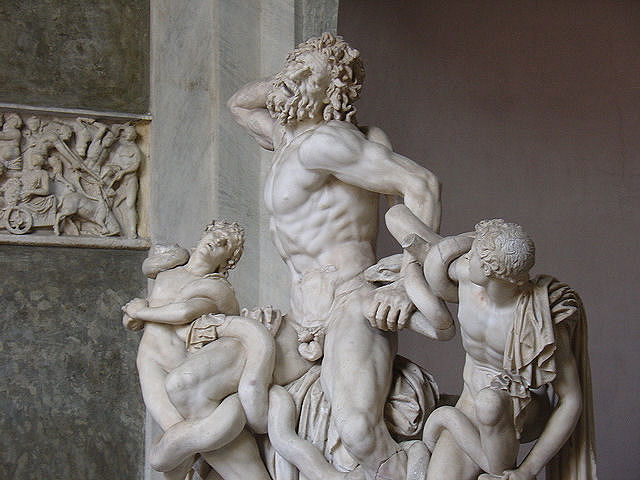 Do you know of the legend of Laocoön?  Laocoön was the Trojan priest of Apollo who warned of the Greeks' insidious plot to invade Troy through an ultimate plan of treachery and deception – a "gift" from the gods or as we know now – the fateful Trojan Horse. A fascinating tale told in the "Iliad" of Laocoön's plight to warn to Prium that the Trojan horse was a fraud and trap, and that it should be burned.  Sentenced to death by Athena, Apollo, or Poseidon, [the actual reason and responsible party varies according to legend], Laocoön and his twin sons, Antiphantes and Thymbraeus, were killed by these two coiling serpents that choked the life out of them.


The Laocoön statue, now in the Vatican Museums, was unearthed in 1506 near the site of the Somus Aurea of the Emperor Nero in Rome, and dates back to 40-20 B.C. Who commissioned and sculpted this extraordinary marble sculpture remains a mystery today, but we do know that it influenced the course of the Italian Renaissance and sculptors alike, including Michelangelo who was summoned to the site after its removal! Thankfully, Pope Julius II, after hearing of its discovery, brought it to the Vatican and placed it in the Belvedere Garden.

Next time you're in Rome, make sure you stop by the Vatican Museum to see Laocoön and His Sons and behold its magnificence yourself!  Discover more of the Vatican and Michelangelo.
Email Post
Labels: Italy Rome Vatican