Soaring Alpine peaks sink into the northern shores of glistening Lake Garda, echoes of passion resound as Romeo proclaims his love to Juliet, the homemade tortellini makes my mouth water—benvenuti a Veneto where you'll discover the delicious flavors of bella Italia. I didn't think it was possible to love Italy any more than I do, but after visiting the Veneto region just west of Venice, I fell passionately in love.


Founded by the Romans in 49 B.C. and located between Milan and Venice, Verona is rich in 2,000 years of Roman history. Fought over for centuries because of its strategic location along the River Adige, Verona fell under the rule of one country after the next, not to mention Venice and Napoleon, until finally joining the Kingdom of Italy in 1861. Despite the catastrophic earthquake that struck in 1117, much of it remains intact because of the city's commitment to its preservation. Today, Verona is a living museum full of artifacts dating back two millennia and my only regret after having visited is the fact that I didn't spend enough time. But I was fortunate to see these not-to-be-missed sights!
Some of my favorites:


Claiming title as the largest amphitheatre in northern Italy, the Arena dates back to A.D. 30 and is built entirely of pink marble. At the time, it could accommodate an unfathomable 25,000 spectators.


Completed in 1376, the Castelvecchio is a sprawling medieval fortress that was once home to the Della Scala (Scaligero) family who rose to power during the 13th century. At the time, the bridge and castle complex was a prominent example of Gothic architecture and includes seven towers, one elevated keep and four main buildings. Surrounding the entire fortification is a moat, now drained of its one-time Adige waters. Today, the Castelvecchio is a museum and exhibition hall housing paintings, weapons and sculptures from 1300 to 1700 throughout its 29 rooms.


Truly, one of my favorite places in Verona was Casa di Giulietta, a mecca for hopeless romantics who travel here from around the world to write letters to our beloved Juliet asking for guidance in romance. The house itself dates back to the 14th century and was probably an inn. Although Juliet never lived here and certainly never stepped out onto the balcony added by the city council in 1928, this romantic courtyard is a must-see attraction. A gentle rub to Juliet's right breast on her bronze statue that stands in the courtyard brings buona fortuna in romance!

The heartbeat of the city of love lies in its piazzas delle Erbe and dei Signori where a sea of humanity ebbs and flows along the bustling cafés and remnants of the past. The former has been the city's marketplace since medieval times and before that, a Roman Forum! Among the cafés that line its northeastern edge, ancient artifacts abound including the Torre Gardello, Verona's first clock tower completed in 1370. Nearby, perched upon its towering pedestal, the mighty Venetian Lion reminds us of when Verona was part of the Venetian Empire.

Piazza dei Signori is where you'll find Dante standing pensive and contemplative as he recounts recent battles with the Black and White Guelphs who forced him to seek refuge in Verona at the invitation of Cangrande I della Scala. Cangrande was later immortalized in Dante's "Divine Comedy" for his benevolence.

My love affair with Italy soared to new heights when I toured Lake Garda. Cradled by the Italian Alps south of the Dolomites Mountains , Lake Garda is a just 40 minutes from Verona and approximately two hours from Venice. Renowned for its world-class resorts and breathtaking scenery, Lake Garda is surrounded by Italian villages lining its shores, soaring Alpine peaks, verdant olive groves, sprawling vineyards and medieval castles towering high above the villages. 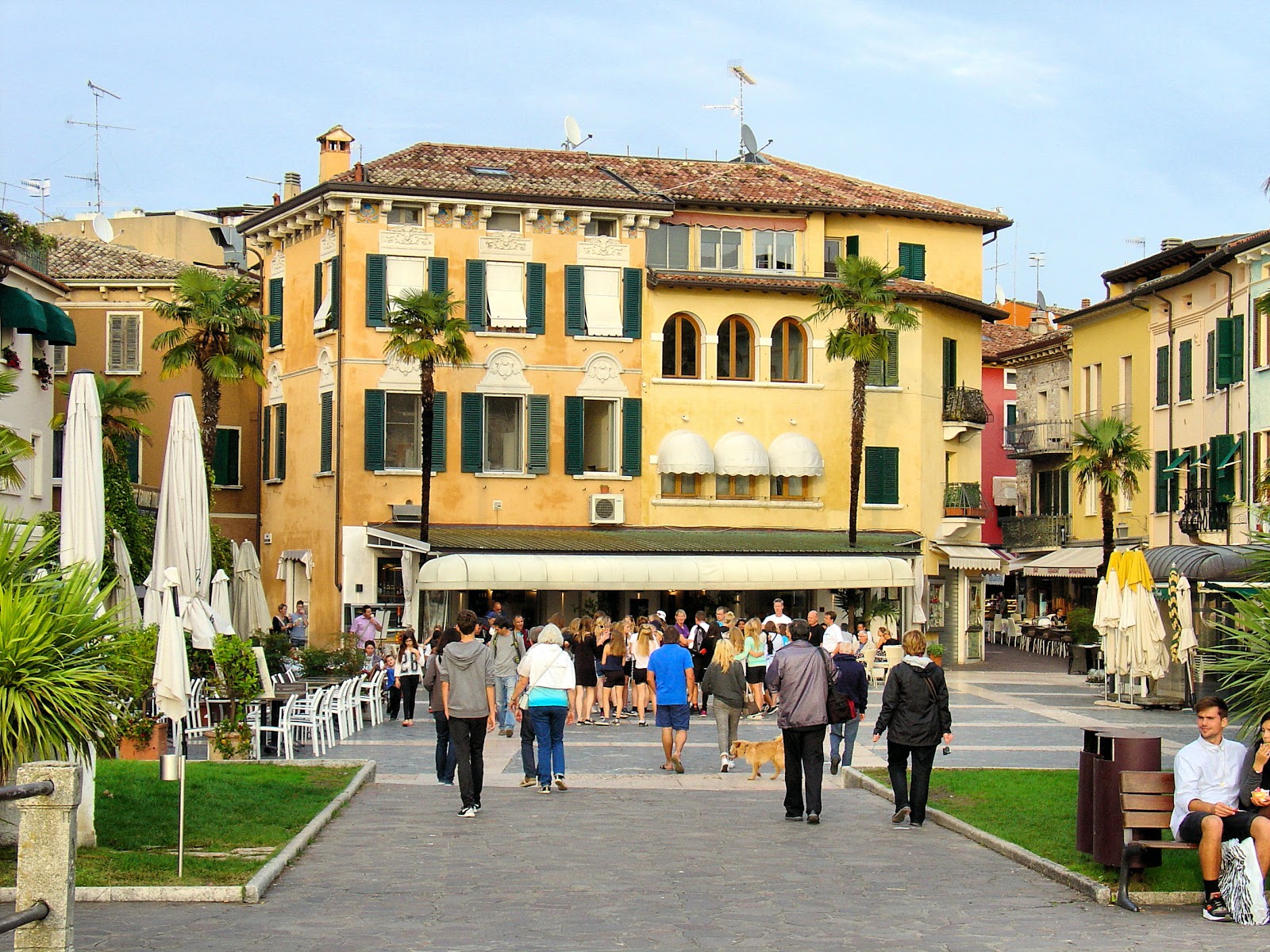 It was my last night in the Veneto region when I discovered the magic of Sirmione, truly one of the most enchanting places on the planet. Accessed via Lake Garda's southern shores, this 2-mile-long peninsula and the views across the lake provided the backdrop for my final sunset in Italy, and if you're fortunate enough to stay longer, you'll love the panoramic views from myriad vantage points along its coastline.

Cross over the drawbridge and you'll travel back in time to the 13th-century when Castello Scaligera or Scaligera Castle was originally built for the della Scala family (Scaligeri) of Verona. Beyond the castle, meander the narrow alleys and discover the winsome medieval village lined with shops and sidewalk cafés.


After a stroll through the cobbled lanes that wend their way around this village of canals, stop by the Osteria Al Canal for a tasty lunch along the shores of Lake Garda. After, climb aboard a motor launch for a boat tour around the imposing 15th-century fortress, the Bastione San Marco or San Marco Fortress which provided protection for many a military campaign.


Northern Italy's answer to Disneyland, Gardaland is a fun-filled theme park with whimsical attractions for the entire family. When I visited, it was just a few weeks before Halloween and throughout the park, Halloween themed settings like the one above decorated the landscapes and attraction facades with frightfully-fun embellishments!

Soar to a bird's-eye view of the entire park aboard the Flying Island or embark on an upside-down adventures inside the Magic House. Coaster fans will revel in the adrenaline-pumping attractions throughout the park. 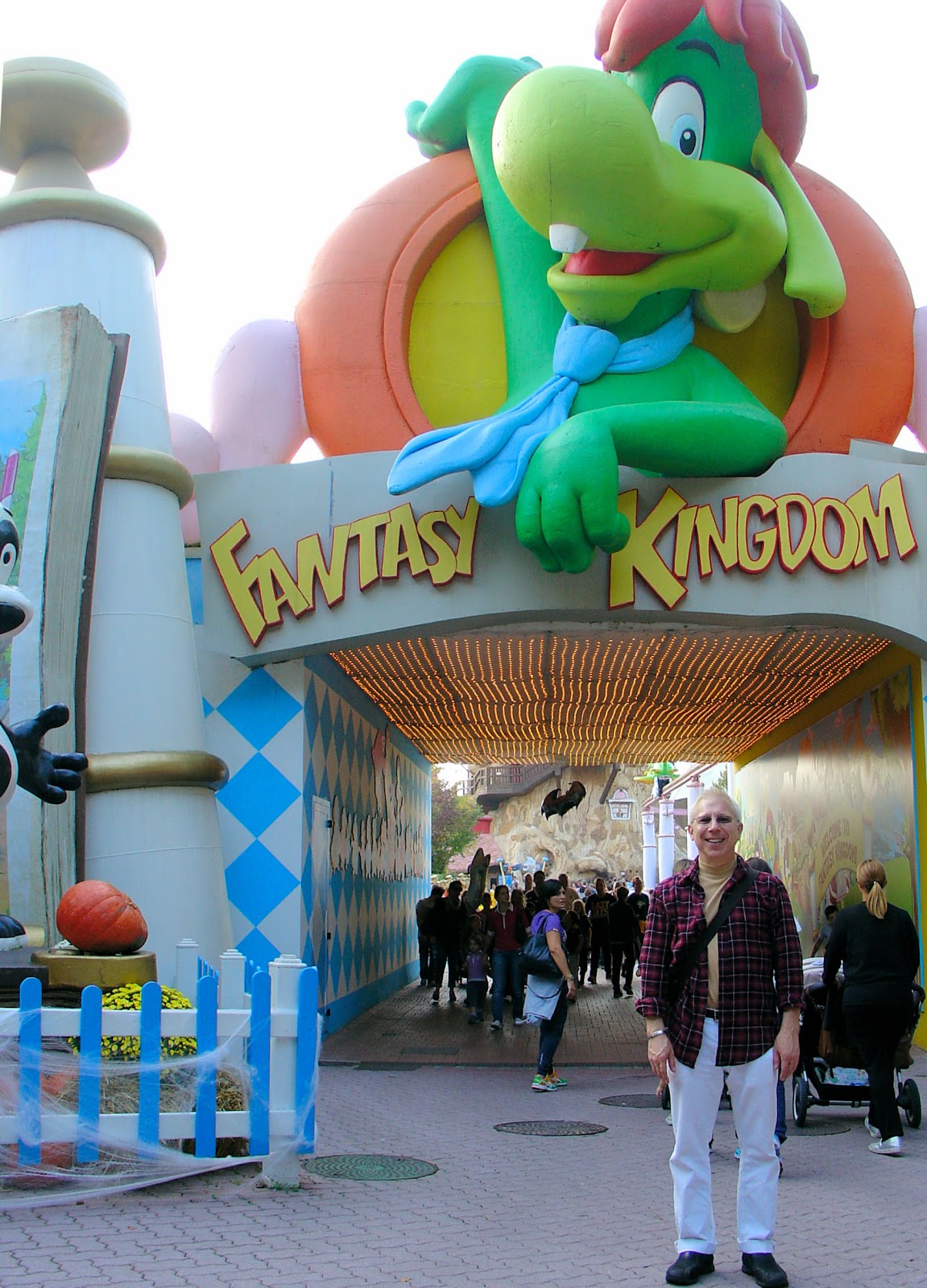 
Clearly one of the most beautiful villages in all of Italy is Borghetto, an absurdly picturesque medieval hamlet along the banks of River Mincio and home to the annual Festa del Nodo d'Amore or Festival of the Love Knots! Borghetto means "fortified settlement" and was established during the Lombard rule of northern Italy. To protect and control the Mincio River, medieval fortifications were constructed including Scaligeri Castle, the Visconti Bridge and dam, and the 10-mile-long Serraglio defensive line. Eventually the area fell to the Venetians in 1405 and sadly only vestiges remain, the scars of natural disasters and wars.


This annual event would convince any tortellini lover to visit this tiny hamlet where 550,000 tortellini are served to 4,000 diners from around the world on long tables stretched across the Ponte Visconeteo. The festival takes place every year on the third Tuesday in June.

In nearby Valeggio sul Mincio, we visited Al Re del Tortellino, a family-owned pasta factory whose mission is to preserve the traditional ways of making tortellini—by hand. Their motto: "There are things that machines cannot do." Little did I know that I would need the skills of an origami artist to fold these little love knots but it was the time of my life nonetheless!


Carefully, we folded the tiny squares in half sealing in the filling. Then with index fingers and thumbs, this is not easy, we grabbed the ends while we pinched the filling and folded one on top of the other until it resembled our beloved tortellini. My first few attempts didn't quite cut it, but after a few more practice runs, I was on my way to becoming the next Tortellini King; and just in time, because the King just happened to stop by to see how we were doing.


In the heart of the Veneto region and within minutes of Lake Garda, Le Ali del Frassino Resort, Restaurant and Spa is a destination unto itself. After five years of renovations, a dilapidated villa was transformed into the sprawling resort and spa within the Lake Frassino nature reserve. While on tour in the Veneto region, I was fortunate to have spent one luxurious evening here that included dinner at Ardea Purpurea, and accommodations in of their magnificent Executive Rooms.


Decorating each of the 92 rooms and suites are exquisitely hand-painted murals of the local flora and fauna and the rest of the spaces are filled with fine furnishings designed to welcome you home in luxurious surroundings.

Health and wellness reign supreme in the world-class spa and while your body is experiencing a little bit of heaven, enjoy the natural surroundings of the lake and wildlife. Also, the resort features three swimming pools, whirlpool and even a grotto.


While I am not one who seeks luxury experiences when I travel, there are those who do and Le Ali del Frassino hits all the marks. For me, it was an unexpected surprise of luxury, nature and old-world charm combined into one unforgettable experience! And wait until you indulge in the culinary delights. I could easily have stayed there a week!
Now, see it for yourself!

Only 1 mile from Peschiera del Garda, Le Ali Del Frassino is your paradise while you explore the best of Veneto!

My heartfelt thanks to Anna Paola Antonini and her colleague Alessandra from Valeggio sul Mincio Tourism; Katia and Marianna from Al Re del Tortellino; Lorenzo from Visit Mantua; Katia from Le Ali del Frassino and the Verona Tourism Board for kindly hosting our company of journalists on this cultural immersion in the traditions and flavors of the region!