I leaped out of bed in the early-morning hours and rushed out to the veranda to see if I could see them—the legendary Pillars of Hercules and our next stop, the Rock of Gibraltar. "Avast" I shouted, "there she is"—a limestone monolith rising boldly from the Mediterranean on our right and her sister in Morocco to the left, nearly 10 miles across the Strait of Gibraltar. For years, I have wanted to visit Gibraltar and thanks to a preview voyage from Barcelona to Lisbon aboard Viking Ocean Cruises' "Viking Star," my dream was soon to become reality.

As soon as our intrepid vessel was cleared, I made way for the gantry. Having no plan whatsoever, I decided to go forth and explore on my own when suddenly a local tour guide approached me, Albert, a rather brawny man who seemed a little too eager to escort me on this tour of the "rock." My gut said to send him packing however his sales pitch was quite convincing and before I knew it, I was hopping into his van with a small group of other passengers from the ship and away we went on our epic adventure to the top of the rock!


Pillars of Hercules—homage to a hero


As we began our ascent of the formidable 1,400-foot boulder, our first stop was at a monument commemorating the Pillars of Hercules, two promontories flanking the Strait of Gibraltar; this one, the Rock of Gibraltar; and the other across the Mediterranean Sea in Morocco—Jebel Musa, or perhaps Monte Hacho near the city of Ceuta, a Spanish exclave on the coast of Morocco. Throughout history, the "other" pillar has been widely disputed by scholars in support of their own theories.

According to one legend, and there are a few variations of the "12 Labors of Hercules," it was during his tenth labor, "The Cattle of Geryon," when our courageous hero was challenged to bring back the cattle of King Geryon, a three-headed monster he had to kill before he could seize the cattle. But first, he had to get to Geryon's castle and one obstacle stood in his way—Mount Atlas, a mountain range that connected Africa to Europe, but it also separated the Mediterranean Sea from the Atlantic Ocean. To accomplish this feat, Hercules had to go over the mountain but instead of laboring to climb over it, he with his mighty strength smashed right through it sending its northern half to Iberia where it became the Rock of Gibraltar while the other went south, Jebel Musa/Monte Hacho; and opened the Strait of Gibraltar while doing so.


After our token photographs of the monument and of the surrounding views including Morocco in the distance, we plunged into darkness and into the past when we crossed the threshold of Saint Michael's Cave whose first explorers, the Neanderthals, roamed our planet an unfathomable 40,000 years ago. The immense network of limestone caverns was created over thousands of years due to erosion from seeping groundwater that transformed into carbonic acid which slowly dissolved the rock. The caves were astounding to say the least and were illuminated in a kaleidoscope of artificial light, ever-changing hues bathing the stalactites and stalagmites in vibrant radiance. As we ventured along the passage, we entered a colossal chamber filled with tiers of seating for a special concert that night. As it turned out, this was one of the optional excursions offered by Viking Cruises. I can only imagine how wonderful the acoustics sound!

After stepping back into sunlight, we were thrust into darkness once again and echoes of the Great Siege resounded in a labyrinth of tunnels excavated by the British military during the latter part of the 18th century when Britain successfully defended its territory against invasions by Spain and France. Miles and miles of rocky passages meander their way through the mountain, a remarkable feat of accomplishment by the British troops nearly 250 years ago; and to think that a majority of the excavation was done by hand, chisels and sledgehammers; with an occasional sprinkling of gunpowder as needed.


As you walk meander along the main artery lined with plaques of information and history about the Great Siege tunnels, you'll also find, to the right and left, larger hewn caves: lookouts where cannons stood at the ready aimed at invading forces; living quarters; or chambers to store gunpowder supplies. Many of them featured life-size dioramas of British troops engaged in various stages of combat or in their living quarters beneath their rocky canopy. 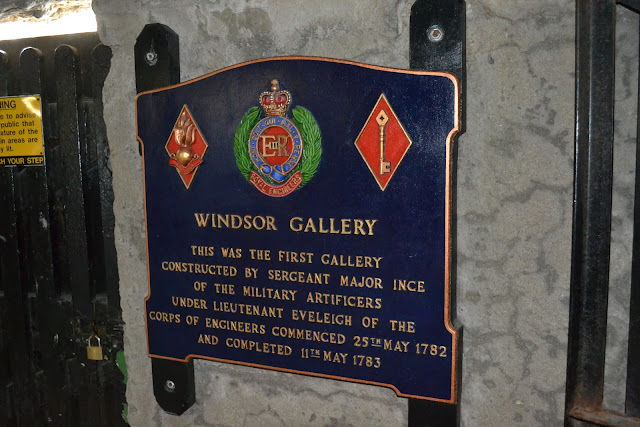 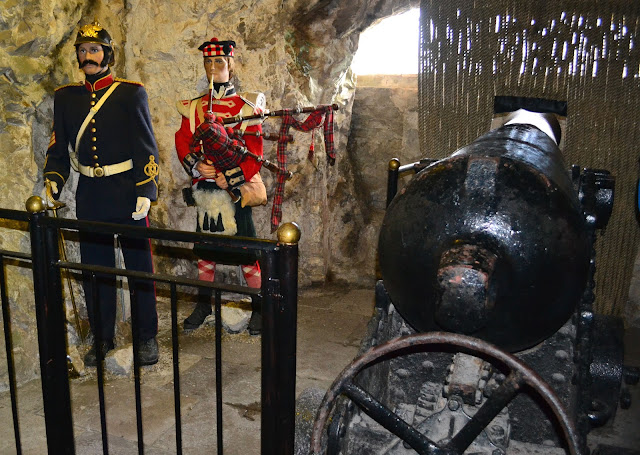 As you make your way into the tunnels and caves, take a look outside the window openings for the most spectacular aerial views of Gibraltar. From one, I eyed the port and the Viking Star, while from another I had a bird's-eye view of one of the most "extreme" airports in the world whose runway challenges pilots every day due to unique weather patterns produced by the mountain and prevailing winds from the west or south. Adding insult to injury, the runway is bisected by a local highway. When planes are on approach, railroad-crossing gates are lowered to block cars as well as pedestrians. It's an incredible sight for sure!

During the World War II, the tunnels were lengthened and today, there is 32-mile network of tunnels throughout the Rock of Gibraltar. One word of caution. As you venture down the passages and go deeper and deeper into the tunnels, keep in mind that the only way out is the way you came; and that's a long uphill walk back to the entrance.

Having explored enough of its interior, we began our ascent to the top for jaw-dropping views and to meet the mischievous Barbary Macaques. As we climbed, we drove along some of the most hair-raising, spine tingling, heart-stopping narrow roadways with barely a boulder on either side to protect us from a fateful plunge far below the 1,400 summit. At one point, I was quite scared as our guide Albert drove to the edge of roadway with nothing before us but the wide expansive vista of sea and sky. After we all gasped, our comical commander at the wheel steered us back to safety once again. Needless to say, adrenalin surged and hearts pounded throughout this trek to the top.

On our approach to the summit, Albert warned us time and time again, not to engage the Barbary Macaques, a small population of monkeys introduced here via Morocco. Heeding his repeated warnings, I decided to photographic the pesky critters and the spectacular views surrounding us. Suddenly something grabbed my ankle as I composed my shot of the panorama before me. After nearly having gone into cardiac arrest, I turned to find Albert shaking with laughter. He then asked if I would like to have one of the macaques sit on my shoulders.


"Are you mad?" I exclaimed. "You repeatedly warned us of the life-threatening danger they pose if we engage them."

"Calm down," he replied with assurance that everything would be okay as long as he was there to supervise my encounter. Of course, with trembling heart, I agreed. Albert then reached into his bag and grabbed a handful of monkey biscuits; then shouted "up" and to my shoulders my furry little friend leapt. Not knowing what to expect, I remained surprisingly calm.

With fears abated, I started to relax as my little Barbary friend rested one arm on top of my head while his other stuffed tasty morsels into his mouth. Suddenly, his curious leathery palm reached down my forehead and my first thought went to my glasses. What if he removes them or worse, breaks them? But thankfully neither occurred. He then began to trace the features of my face and as it turned out, this tiny simian savage from Gibraltar was just as curious about me as I was of him.

"Down" thundered Albert and off jumped my little friend. Still reeling with excitement, alas it was time to head back to the ship.

If you enjoyed these adventures on the Rock of Gibratar, I suggest you seek out Albert Muñoz at amunoz@gibtelecom.net or call 00 35 05 416 1 000 to arrange for your tour before you arrive. I can't say enough about how much I enjoyed it and Albert, not only for his in-depth knowledge of Gibraltar, but his sense of humor and entertaining personality, not to mention his lovable demeanor. I hope to meet him again someday!

The cost of our tour for 1.5-hours was €35 but because we took a little longer than expected, actually 2.5 hours, we compensated Albert for his lost time not mention for the informative and entertaining tour of Gibraltar!

Viking Ocean Cruises sails through the Strait of Gibraltar on many of their itineraries. For more information, visit VikingOceans.com.

Did you know that although Gibraltar is surrounded by Spain, it's actually a British overseas territory? And it's filled with all of the charms of the U.K.

Anchored off our port side and right outside my stateroom was this view of the world's largest private yacht—the Azzam cost a cool $630 million and is owned by the President of the United Arab Emirates. How about a spin around the marina in this multi-million-dollar baby?!

Special thanks to Viking Cruises for inviting me for a preview cruise of the new Viking Star. Memories will last a lifetime. Of course all opinions, effusive ebullience and alarming fears expressed herein are mine and mine alone. 😉