Postcards from Norway—impressions of the fjords

They call it the land of the midnight sun, where northern lights dance upon velvet skies, and in between—the blue hour—that perpetual state of twilight especially beautiful in Norway. Home to the world's most rugged coastline and Europe's longest—it's a place where unrelenting fjords carve their way through pastoral settings forging the most magnificent landscapes whose idyllic silence is broken only by thundering waterfalls and the delightful cacophony of seagulls. Voyage upon these azure waters and the mountains reveal enchanting villages steeped in Norwegian culture and tradition. Norway, Europe's final frontier, has captivated artists, writers and composers for centuries—all of whom have sought inspiration in its scenic splendor so wondrous: Edvard Grieg, Edvard Munch, Ole Bull, J.C.Dahl, Henrick Wergeland—among others! My voyage was equally inspiring and so I welcome you to this pictorial souvenir of sorts, a collection of impressions to inspire accompanied by some of my unforgettable memories.


We began our journey in Norway's oil capital, Stavanger—specifically Old Stavanger or Gamle Stavanger as it's known locally. This picturesque quarter nestled upon the hills along the Port of Stavanger is chock-full of cobbled lanes lined with charming clapboard houses dating back to the early 1800s.


After our tour through the historic village, we sailed into the light, so to speak, the "light fjord" or Lysefjord as it's more commonly known, our first voyage and introduction to the Norwegian fjords. We sailed past a pirate's cove and cascading waterfalls and arrived at a towering precipice perched 2,000 feet above the fjord. Intrepid explorers hike two to three hours for spectacular views from Preikestolen or Pulpit Rock.

Haugesund—the Land of the Vikings


We arrived in Haugesund to travel 800 years into the past to the reign of Harald the Longhair. At the Nordvegen History Center, we visited a reproduction of a settlement upon ancient Viking ground and stopped by Saint Olav's Church for a all-too-brief visit to Saint Mary's Needle—a 7.2-meter granite obelisk that appears to lean upon the church. According to legend, if the monolith were to fall upon the stone wall of the church, it would be dooms day for all. Fear not friends for priests have chiseled away at the opposing side to prevent such a calamity.


Our intrepid voyage continued to pay our respects to the Queen's Fjord or Hardangerfjord, Norway's second longest fjord at 111 miles (179 kilometers) and renowned for its Folgefonna Glacier, Norway's third largest; the country's most famous waterfall—Vøringsfossen; not to mention Trolltunga or Troll's Tongue Rock—a rocky slab that cantilevers above dizzying heights but yet, offers awe-inspiring views of the fjord. This region is also known for the bountiful harvests offered up by the fruit orchards that line many of its shores.


As the lunch hour drew near, we ferried to the land of Utne, home to Norway's oldest hotel in continuous operation—The Utne Hotel which opened in 1722 and is as quaint and charming as they come. It's also home to Mother Utne, who managed the hotel for 70 years until her death. Some believe she still does.

From the oldest inns to the one of the most magnificent—the Hotel Ullensvang on the shores of the Hardangerfjord was home for an all-too-brief one-night stay in my magnificent parlor suite—Room 545. I couldn't believe it when I walked into my palatial palace located on the 5th floor in one of the hotel's turrets—replete with bed, bathroom with a glass wall behind the tub to enjoy the fjord's views and then, though another door, adjacent to my wrap-around balcony, was my very own parlor—an exquisitely furnished living room elegantly appointed with all the trimmings! I could have stayed for a month!

Located in Lofthus, the Hotel Ullensvang has been managed by five generations of Utnes and has come a long way since its humble beginnings in 1848 when Hans Utne opened his one-bedroom inn in a loft above his steamship agency.

On the hotel's grounds, the music of Edvard Grieg filled our imaginations as we paid a visit to his hytte or cabin, relocated here from elsewhere in Lofthus. Inside, we found a writer's desk and a piano, however, it remains to be proven that Grieg actually tickled its ivories.


The next day, up before the roosters I might add, we were heading to our journey on the rails, Flåmsbana or the Flåm Railway from Myrdal to Flåm but first we had to catch another train from Voss to Myrdal.


Upon our arrival in Myrdal, it was all aboard the Flåm Railway for one of my most memorable experiences in Norway. The Flåm Railway or Flåmsbana is an hourlong train ride on one of the world's most scenic railways not to mention the world's steepest railroad gradient as well. From Myrdal's lofty perch of 2,850 feet (866 meters) above sea-level, the train descends the craggy cliffs along a 12.5-mile (20-km) track through dramatic landscapes, 20 mountain tunnels and a surprise stop at the Kjosfossen or Kjos Waterfall where we disembarked to the enchanting sounds of the hulder, mysterious sirens who dwell in sylvan lands and bewitch unwary travelers with their hypnotizing melodies. I too was hypnotized when their sweet song filled the mist of the falling waters.


After our adventure on the rails, it was lunchtime at yet another historic Norwegian inn—the Fretheim Hotel in Flåm. We were welcomed by manager Mette who regaled us with the hotel's history as well as that of the Fretheim family whose matron Marthe Fretheim, like Mother Utne, continues to "oversee" operations today. After our tour of the property including Marthe's private quarters, Mette escorted my colleague and me on a tour through old Flåm, the most picturesque little village we first caught glimpse of as we descended into the Flåm valley aboard the rails. She drove us in her own car through one of the most picturesque places in Norway and shared her experiences growing up in this valley of the fjords. I even encountered my first yak, although I've heard of these magnificent creatures, I've never seen them up close and personal until that memorable day in Old Flåm. 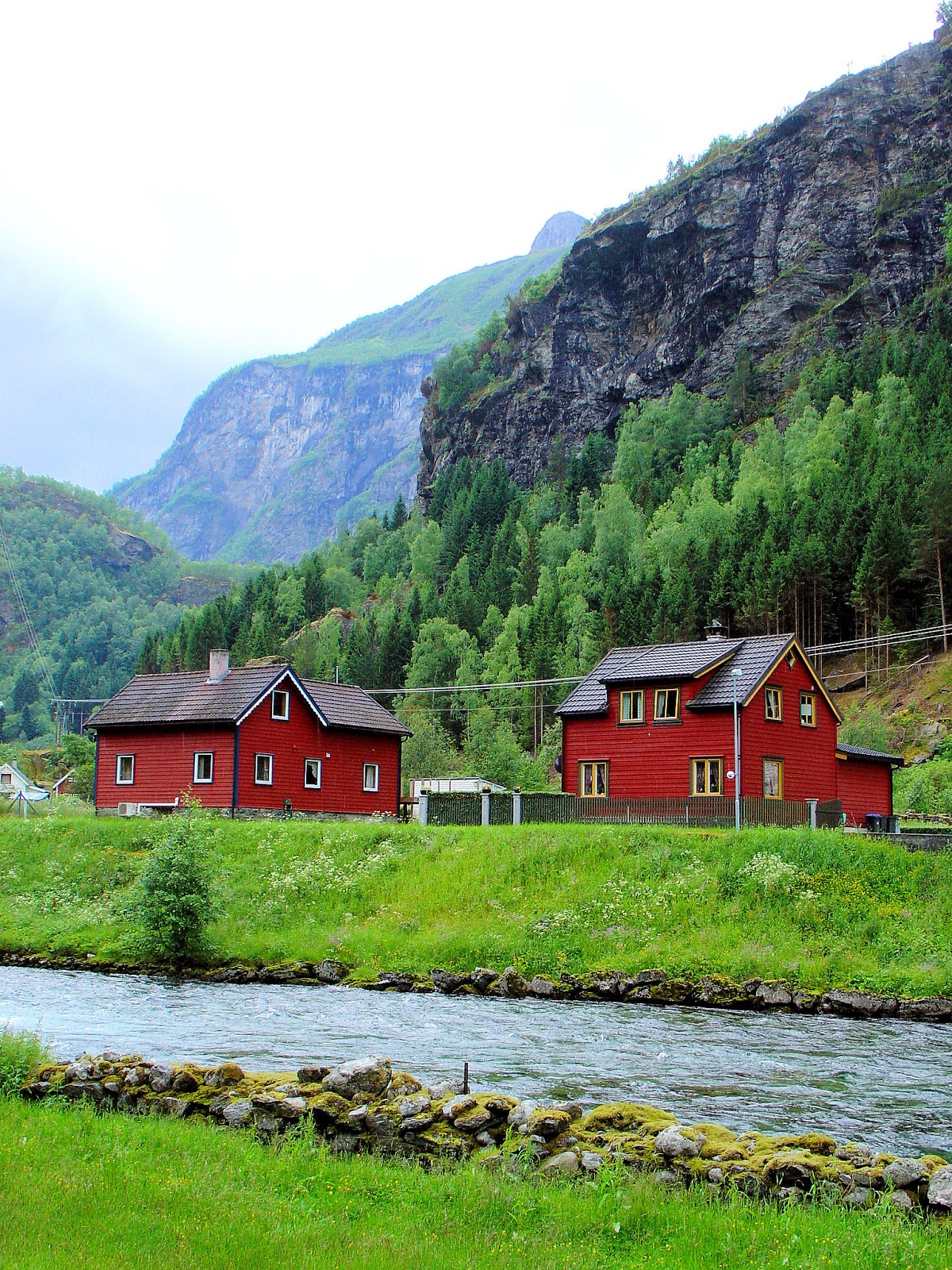 
As the day drew to a close, our ferry left Flåm at 4:30 p.m. en-route along the King's Fjord or the Sognefjord—Norway's longest and deepest plunging to icy depths of 4,300 feet. Truly the king of fjords! For the next three days, we called Balestrand home—a quaint hamlet clinging to the shores of the Sognefjord. Because of its unique quality of light, Balestrand has attracted artists, writers and tourists since the 19th century, including Dahl who built his residence here in 1893. At its heart is the "Jewel of the Sognefjord" or the Kviknes Hotel, one of Norway's largest historic inns. Owned by the Kvikne family since its doors opened in 1877, the exquisite edifice embellished with ornate latticework is built in the "swiss-style" architecture that was prevalent in Norway for much of the 19th century and can be seen on many buildings throughout Balestrand as well as other locations in Norway. Needless to say, it's positively enchanting.

Kaiser Wilhelm II vacationed here before WWI and beneath one of the chairs in the banquet room, a plaque was found. No one knows exactly who burned this inscription to the plaque but it reads:“Kaiser Wilhelm sat in this seat on Saturday, July 25th, 1914 in the afternoon when he was visiting Professor Hans Dahl… to say goodbye. He left at 6:00PM when he received the news that war had broken out between Austria and Serbia.”


Undoubtedly one of the prettiest villages in all of Norway is Fjærland located at the end of the Fjærlandfjord, a branch of the mighty Sognefjord. Gateway to the Jostedalsbreen Glacier, Norway's largest; and the Norsk BreMuseum where Ötzi the 5,000-year-old iceman lives; the village of Fjærland is home to the 3-mile Norwegian Book Town—Bokbyen—renowned for its collection of second-hand books housed in quaint little sheds lining the shore. Look further and you'll see the historic Hotel Mundal that dates back to 1891. I heard we may even see a mammoth or two.


Bergen — Gateway to the Fjords


Our final stop of our epic trek through the Norwegian fjords was Bergen—gateway to the fjords and Norway's second-largest city. After our 4-hour ferry from Balestrand—a most welcome retreat into slumber after rising with the rooters on that day—we disembarked in Bergen where we spent our final three days. At its heart is Bryggen, the historical center of this big-port city with small-town charm. We toured these slightly leaning and sinking storehouses that date back to 1702 and learned of the ways of life of the storekeepers and their workers.

Our first night's dinner turned out to be quite the adventure! We hopped onboard another railway, this time it was the Fløibanen—a funicular that climbs the precipitous slopes of Mount Fløyen to the Fløyen Restaurant built in 1925 with the most commanding views of coastal Bergen. Be sure to grab the front seat of the tram for a most amazing ascent!


How could you possibly come to Norway without listening to the symphonic melodies of Edvard Grieg? We were off to Troldhaugen to listen to a lovely concert performed at one of the most beautiful eco-friendly concert halls I have ever seen—the Edvard Greig Museum and villa. Blanketed by a roof of sod, you would never believe that grass hut is one of the most beautiful concerts venues that even invites nature inside to provide a stunning backdrop as you listen to Grieg's piano concertos resounding through the hall.


Alas, it was our final day in Norway and my colleague and I had accumulated a little too much to fit into our luggage so off we went to do a little shopping in the Bergen city square. After we purchased our much-needed carry-ons, we asked the salesperson to recommend the place that makes the best pastries in all of Bergen. Much to our surprise and delight, the Baker Brun was just around the corner from our hotel so off we went to sample Bergen's signature danish—skillingsbolle, a cinnamon bun that was simply put, out of this world! With coffee in hand, we kicked back and enjoyed our respite in sweet indulgences!

Throughout my journey, I was known as the "Troll Hunter," hunting and capturing these impish creatures and persuading them to pose for a picture with me. To say they hammed it up a bit is an understatement as you'll see.


Sadly, our epic journey through the Norway fjords was coming to an end but the friends and memories I have made along the way I will cherish forever. I was living in each and every moment—reveling in scenic lands steeped in history, delighting in encounters with people whose traditions customs were once foreign to me, indulging in delectable tastes every chance I got—these, my final impressions, mark unforgettable moments of a lifetime!

A special thanks to my friends at Visit Norway and Fjord Norway for inviting me on the intrepid journey. All opinions expressed are my own, with some unsolicited help from the trolls.