I am thrilled to introduce my guest blogger, Paula and Gordy from ContentedTraveller.com who have been travelling ever since they met 10 years ago, and for some unknown reason are contented traveller(s). They represent the baby boomer / emptynesters who are share their love of travel and unusual adventures, but also, and most importantly, their ability to embrace serendipity. You can follow their adventures on Twitter too @gordyandpaula. Without further ado, I bring to you Paula's and Gordy's take on Brussels!

Many travellers have largely ignored Brussels, the much maligned capital city of Belgium. It has been a go through city, rather than a city break or long-stay destination. However things are changing. There are rumblings that the tide is turning and that people are re-discovering Brussels and liking very much what they are seeing and feeling. It would appear that this little gem is becoming a hotspot for travellers.

The quandary that is Brussels

One wonders why Brussels has so often been criticised, but it appears that the city does suffer a little from a bi-polar disorder. Many say that the people of Brussels, the Bruxellois, are cold and indifferent, but from personal experience, they are not.

It has been said that as Brussels is the HQ of the European Union, that no one else wants to play with them and that the city has become sterile with the influx of workers from many countries. Actually it just has made it much more multicultural and that can’t be a bad thing.

It has often been said that the Bruxellois do not bother to make friends with people working at the EU because it would be a transient friendship. Well maybe, but friendship does go two ways.

Many cannot fathom the differences between the Flemish (Dutch-speaking region of Belgium) and the French elements of the city, but don’t worry because they can’t either. Brussels is suffering from a bi-polar disorder but that is not stopping people from discovering its charms. It quite probably enhances them.

The look of Brussels


Brussels is visually very appealing. They are exceptionally proud of their dedication to the arts and especially the Art Nouveau architecture which abounds in this city. There are many museums and galleries to show the world that they are indeed bohemian, artistic and cultured. It is also very green with lush formal and informal gardens, including the “secret park” hidden behind Rue Faider. The historic buildings sit very nicely alongside newer buildings and some excellent street art is on display. The "Adventures of Tintin," created by Belgian cartoonist Hergé (Georges Remi), is featured on many walls throughout Brussels.

Brussels has some very fine museums. The Musees Royaux des Beaux-Arts is a fusion of both old and new art. The Musee Magritte is where you will see Belgium’s favourite son, the surrealist artist René Magritte’s works. The Musee Horta is where you will be able to experience the genius of Victor Horta, the pre-eminent Art Nouveau architect to whom Brussels owes much of its architectural and visual appeal. The Cathedral of St. Michael and St. Gudula is a Gothic masterpiece; and the castles of Gaasbeek and Beersel are both fascinating and not far from the city.


The Grand Place is the central square of Brussels and is exactly that, very grand. It is surrounded by the preserved guildhalls, many adorned with gilded statues. This is where you will find a lot of trendy little cafés. It is a visual and historically stunning panorama.

Side streets in Brussels

Walk down any of the little cobble-stoned streets and you will enter some more authentic cafés and bars. The Rue des Bouchers still has lots of beautiful architecture dating from the 17th century as well as many side walk cafes. At the end of the street, you can find the Résidence Centrale, a serene silent zone where the fountain of La Cracheuse is located. 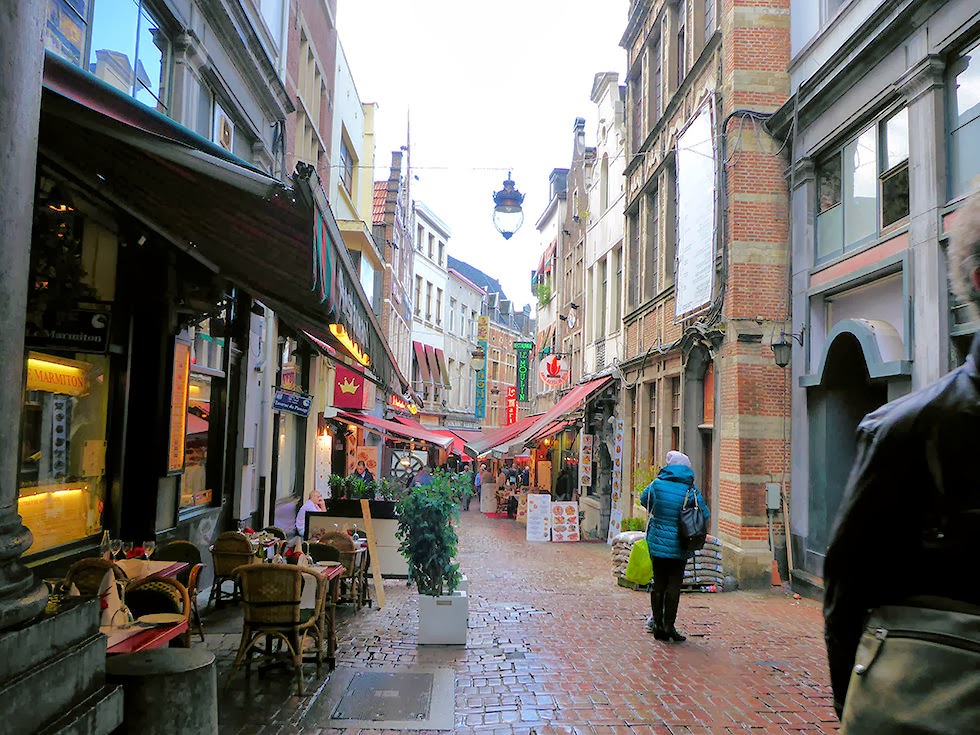 The Rue des Dominicains is a lovely street where you can find the Restaurant Vincent, whose are walls are covered with painted ceramics. Sit down with the local people; don’t be scared, as they are actually very relaxed if a little sardonic. 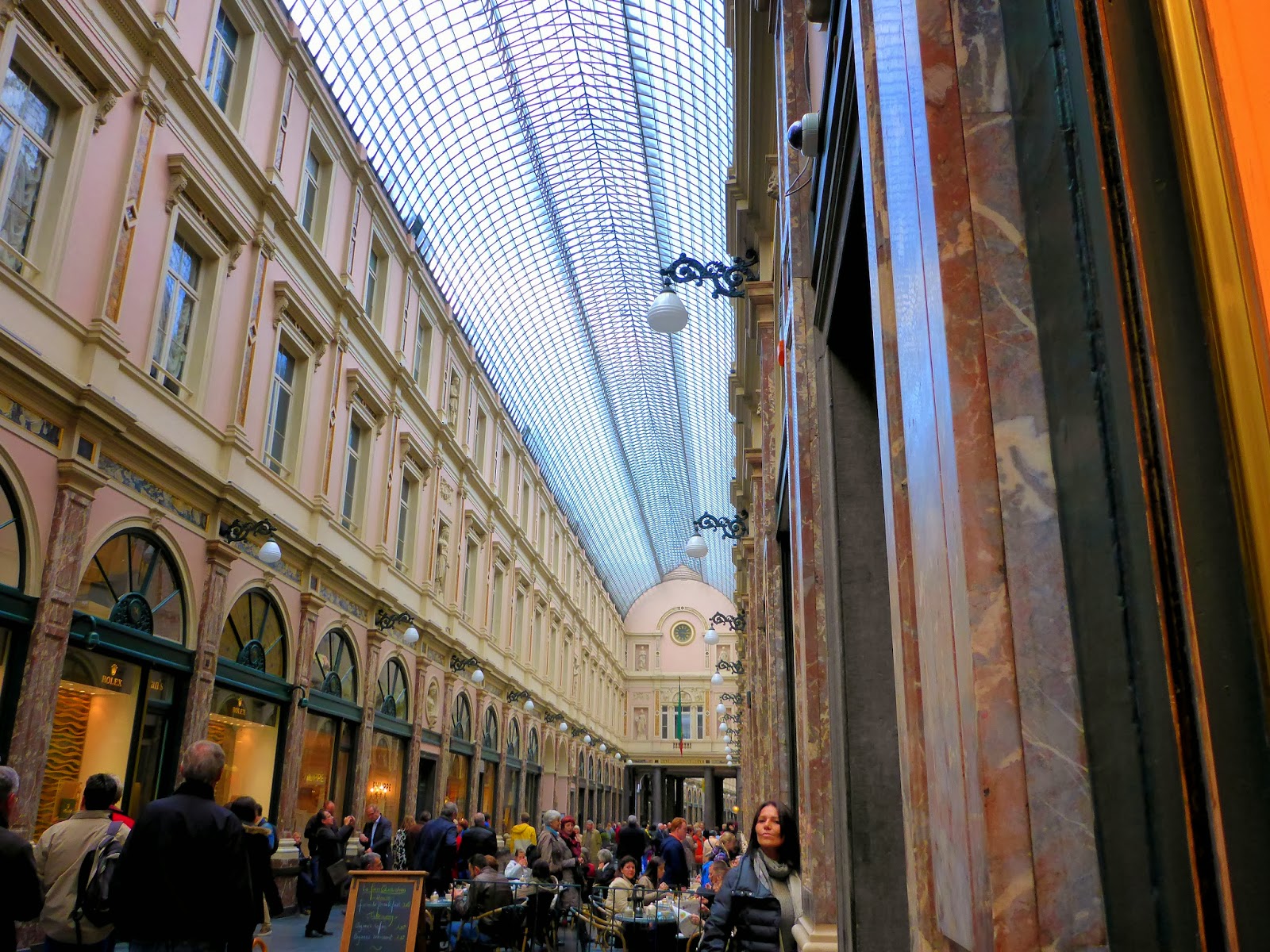 Brussels is a bit of a legend when it comes to shopping. The Avenue Louise is renowned for some of the finest designer boutiques, but all over Brussels you will find vintage stores and local markets, showcasing many goods. There are also many chocolate shops with simply amazing displays.

The food in Brussels is extremely good. Brussels is well known for its chocolates, waffles and its beers and it would be remiss not to sample these. The mussels are succulent and the frites (French fries) are also worth the effort, as are the speculoos , a spicy biscuit that is much favoured here. The cheese is also seriously good, from very contented cows.

Brussels is worth visiting. Embrace this stunning city, embrace its bi-polar characteristics because this is probably what makes it so appealing.